Interview by BCCM
Photography by ORIcorp

ORICoop exists to increase the amount, and the productivity, of organically and regeneratively managed land across Australia. It has over 260 members that include farmers, friends, and aligned businesses. It supports farmers to be better land stewards of our critical ecological food and farming system.

ORICoop has supported their organic farmer members across Australia following the 2019-20 bushfires, 2020 floods in NSW and 2021 storms in Gippsland. It has created a nationwide community for organic farmers providing them with expert biological support to rehabilitate their farmland following disaster and map out a recovery strategy. In addition, they have mobilised to provide personalised disaster relief donations for organic farms and ongoing emotional and social support for impacted members.

ORICoop has a purpose to preserve land that is certified organic. Part of that purpose involves supporting disaster affected organic farmers, restoring their faith in their business and land, and continuing their farm to be organically certified. The co-operative has evolved in building a strong community of like minded organic farmers who support each other in times of need. Farmers in general can be socially isolated. Organic farmers represent less than 10% of farmers in Australia, and can suffer additional isolation as they approach farming very differently to some of their neighbours. Even in times of disaster.

“We asked what is it that the farmers need and how can we help? They don’t need massage vouchers. They want someone to help restore their soils and map out a recovery pathway.”
Carolyn Suggate, ORICoop Founder and Director

Membership of ORICoop costs $100 initially, with a $50 annual fee for farmers and friends. All members have one vote. The co-operative also has Investment Offerings and they have recently released their Partners Program.

The co-operative has also developed a farmer owned ‘ecological credit’ called the Eco-Credit – supporting producers to benefit from their environmental land stewardship. The co-op and its members are supported by an extensive network of volunteers and supporters, including the board of directors. 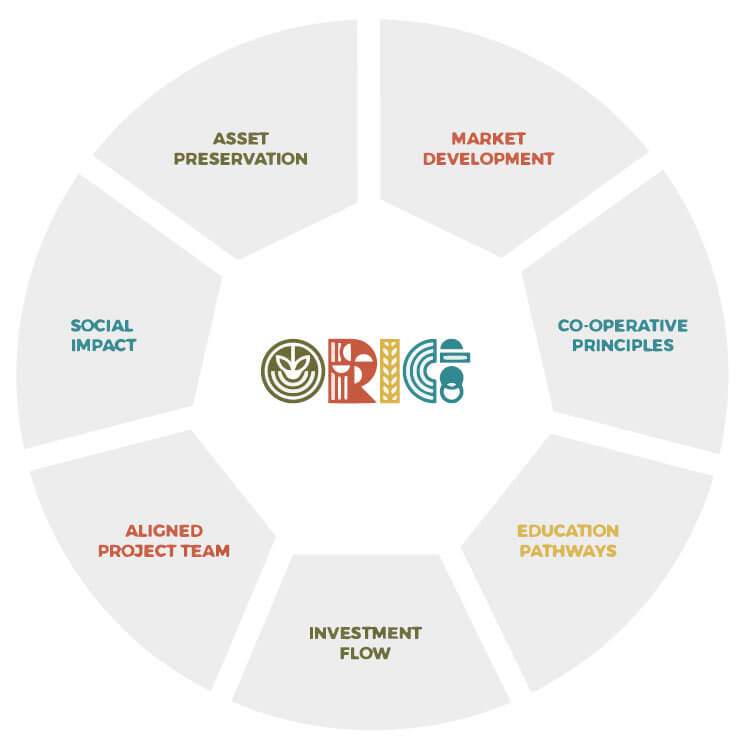 After the 2019-20 bushfires, ORICoop actioned their Organic Producers Bushfire Appeal. They called affected producers and asked, “Are you ok, and how can we help?”. A lot of the government relief support was not appropriate for organic farmers, so ORICoop stepped in to fill this gap.

They raised over $89,000 in cash that included a $25,000 grant from the AMF and BCCM’s bushfire grant pool. ORICoop more than tripled this figure into $450,000 worth of value which included consultants’ time, and materials donated including organic compost, biological stimulants, securing soil tests at cost price, six truck-loads of certified organic hay and more. They were able to help 15 bushfire affected farmers in seven different bushfire affected areas across Australia.

Organic farmers have different needs to conventional farmers with regards to land management and what inputs and donations can be used to maintain their organic certification. ORICoop sought to fill these needs by coordinating the donation and transport of organic hay relief, free soil testing and free biological specialist advice from leading experts on organic and regenerative soil and farming techniques. This customised advice helped farmers to make the most of what they were able to produce after the fires and set out a way forward to regenerate the land.

“After the fires the rain washes away the nutrients from the soil that were created by the fire, we helped impacted farmers improve the organic matter in their soil to increase their production”
Greg Paynter, Member and Expert Consultant Volunteer

Organic farming is knowledge intensive. This free specialised support and knowledge sharing was invaluable to farmers in assisting them to not walk away from their lifetime business. Not only were these consultants helping them practically with what they needed, but they were offering hope and emotional support.

The co-operative also has considerable information shared on their website including protocols for soil testing and other resources. This information is available to all, including conventional farmers or those considering transitioning to a more biological farming approach, as they believe this knowledge should be shared with all types of farmers.

Another initiative that ORICoop started was farmer group video calls to bring together networks of organic farmers around the country. These calls allowed farmers to talk to each other to exchange methodologies on how they dealt with certain situations and to ease the stress and social isolation in a safe environment.

There is a lot of faith in the co-operative and the membership is growing. These strong social networks that the co-operative holds further helped recovery. For example, through their network they were able to arrange donations of specialist equipment and to match it to those wanting to donate. This resulted in a $6,500 ferry fee to deliver organic hay to Kangaroo Island being paid for by Demeter Biodynamic Certified after one third of the island was burnt, with a biodynamic producer in need of hay for their livestock. The load of hay was contributed to by four different producers across the Marnoo area.

Another example of their hands getting dirty involved pulling together a team of volunteers to help process a whole crop of garlic that had been roasted in the field during the fires so that the crop was not lost. This even involved the creation of a new specialist product for the farmer that could be stored and sold later by the processor.

“Putting surplus back into the co-operative is important to supporting the values of this community”
Gerhard Grasser, Member and Expert Consultant Volunteer

ORICoop found that the personal and tailored approach to supporting farmers has made a significant difference to these producers. They are able to make a small amount of money go a long way in addition to making people feel supported and connected.

After the NSW floods in 2020 and recent storms in Gippsland in 2021, they were also able to continue this model of support that they had established from the bushfires. Including reaching out to producers – and coordinating another load of organic fodder to producers in need in NSW.

“ORICoop has come into its own since the fires”
Carolyn Suggate, Founder and Director

Long term, ORICoop hopes to create a network of primary producer and consumer co-operatives that are involved with organic produce. It is a great example of a co-operative that shows concern for the community, as well as supporting its members with education and training, both key international co-operative principles.

ORICoop is now investigating a mechanism that would create a resilience ‘pool’ for ongoing natural disasters, through allocation of 5% of turnover, which will prepare the co-op to respond quickly to future climate and other disasters affecting its members and organic farmers around Australia.

ORICoop has connected a community of organic farmers across Australia who have supported each other physically, financially, emotionally and practically through the 2019-20 bushfires and other subsequent disasters. Focusing on supporting organic farmers with what they need, they delivered personal support by way of biological and on-farm advice to rehabilitate their soils and farmland post disaster.

Bringing together a small sector of primary producers to share knowledge, resources and create community can lead to a multiplication of benefits. The resourcefulness of the leadership has seen ORICoop turn the $89,000 it raised to respond to the bushfires into over $450,000 of value directly back to these affected producers.

ORICoop is a relatively new co-operative that is building on the organic farming community that they have connected within their membership. This has allowed them to continue to innovate in developing a resilience fund in addition to piloting its own farmer-owned Eco-Credit reward system.

With a focus on training and knowledge sharing, ORICoop shares its resources publicly and is supporting the broader sustainability of primary production, soil health and food security across Australia.

Every single grower returned to business after Cyclone Olwyn in 2015, even with an 18 month shut down in production due to longer growth cycles of smaller banana species.
SEE ALL CO-OP AND MUTUAL CASE STUDIES