“To support the community of Cobargo and districts to grow and prosper into the future, being open to how this may evolve. We aim higher than just economic growth, looking to support Cobargo’s social capital by being a vibrant and interactive place where community feels safe and supported to connect.”

This experience has built a stronger connection to the community – people now know we are a co-op, not just a shop.
Dan Williamson, Manager

Cobargo Co-operative Society Limited (Cobargo Co-operative) is a community owned enterprise that has been operating since 1901. It exists purely to serve the community of Cobargo and its surrounding localities. The significant social connections that the co-operative have established over its long history was the foundation of its ability to not only respond quickly, but to be vital in the ongoing social, emotional and economic recovery of its community.

The Cobargo Co-operative is located in the township a Cobargo, a small town of approximately 900 people in the Bega Valley Shire, NSW. It is located on the Princes Highway approximately five hours drive from Sydney and eight hours from Melbourne. Originally operating as a butter factory, the co-op started as The Cobargo District Co-operative Creamery Butter Company Limited. The rise in opportunities for farmers to be able to sell their liquid milk product for a better price saw the close of the butter factory in 1982 and the emergence of the co-operative as we know it today.

Over the years the co-operative has transformed from a dairy farmer producer co-operative to a rural and agricultural supplies and hardware store supplying the local community with a vast range of agricultural, hardware and garden products with a growing membership base of over 1685.

They now sell everything from stock feed, drenches, chemicals and fertiliser to fencing, rainwater tanks and irrigation. The comprehensive garden centre is well known for its wide range of plants, and as a source of rare and unusual varieties. A selection of general hardware, plumbing and paint supplies is available in addition to petrol and diesel fuel.

After the New Year’s Eve fires that devastated the rural community in 2019, the Cobargo Co-operative not only became ground zero for the disaster response, but has gone on to play a pivotal role in the ongoing recovery of the community.

After the destruction of many of the shops in town, the co-operative became a central meeting place for people to gather for information and to give each other emotional support. In response to the emergency, the co-operative responded first on the ground opening their store to provide rationed fuel and emergency feed and fencing supplies for livestock and pets.

The co-operative team mobilised two days after the fire to help people who were desperate for supplies in particular fuel and feed. They opened with a notebook ledger to record sales as the power, internet and phone lines were down. They set up a generator to pump fuel and operate the shop, using a rationing system to get tourists out.

After the initial weeks unfolded the co-operative distributed donations individually as people called them to give money and supplies knowing that the local co-operative would know who in the community needed support the most.

It took several weeks for further relief to come, and the co-operative was integral to identifying the distributed donations of food, clothing, homewares, hay and other agricultural goods. Their strong social network within the small community meant that they knew who had been impacted and how, and what they needed.

We know it is a huge community asset and they needed someone there to help as nothing was open. Having those values and being a co-operative made a difference to how we responded and what we did.
Dan Williamson, Manager

This social capital was invaluable to not only ensuring that support from other areas was delivered appropriately, but that it supported the emotional recovery of the community. The team at the co-operative stood out in the level of care and concern that they showed for their community. Everyone who worked in the co-operative was affected in some way by the fire, but they still showed up to work. Manager Dan Williamson took the lead in coordinating those employees that could make it to work. He made sure that the members were supported.

We made sure people are aware – this is your store, what do you need?
Dan Williamson, Manager

According to the co-operative, because they are a community owned business, members of the public and charities had confidence in their ability to distribute funds without risk of a private business misusing funds. Charities were being criticised in the media for being slow to disperse funds quickly and directly to individuals in need and the co-operative was seen as an alternative vehicle through which to direct aid immediately.

Margins were reduced on key recovery items such as hay and fencing. These were available to everyone, not just co-operative members, demonstrating the community minded values of the co-operative. Eighteen months later these margins remain low as the recovery is ongoing. When the co-operative was able to secure a discount from a supplier wanting to support the recovery, they passed it on to their consumers rather than increasing their surplus. The co-operative also raised money to support other activities in the community including contributing $6,000 to the renovation of the RSL building to provide another community meeting place where recovery activities could be held. 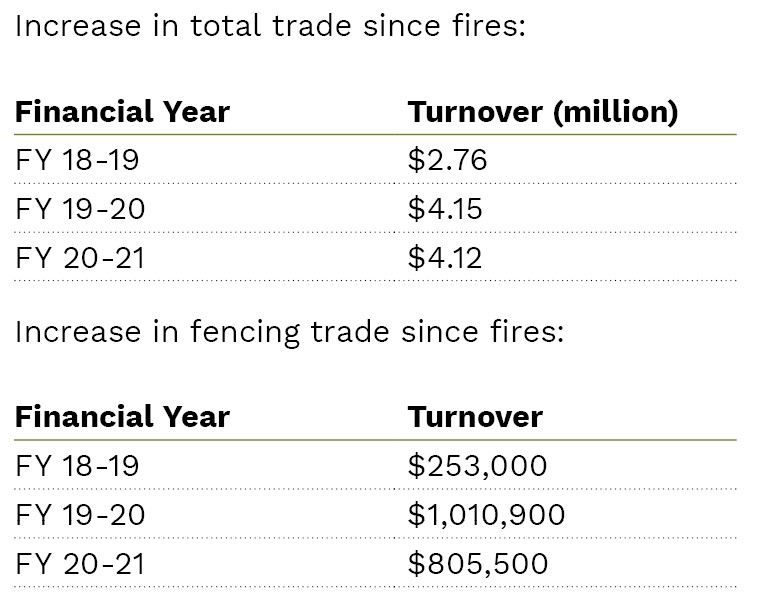 In addition to the increase in turnover, membership continues to increase. Many customers who come to the shop who have never been members, became members after the fires as they witnessed the considerable efforts the co-operative dedicated to the recovery. 94% of sales are from members which shows a strong membership base.
There were also 1.5 new local jobs created within the co-operative in 2020 to meet the increased activity. This increase in the co-operative’s turnover was a direct economic stimulus into the local economy. This is supported by the EY Sticky Money Report which found that for every $1 spent at a co-operative $0.76 of additional value is generated.

he co-operative has supported numerous additional community projects to support the ongoing recovery of the town including securing a $15,000 grant from the Australian Mutuals Foundation (AMF) and BCCM to fund a new Tool Library on the co-operative site to provide a place where the community can borrow tools. This initiative supports the community. It is unique to a co-operative model as many for-profit businesses would not support the funding of a tool library that would reduce demand on their retail tool sales to be located on the same property.

The co-operative has also supported a new business hub that is going to be built on their land to support the further economic and social recovery of the town and to replace many of the shops that were lost.

The value of the co-operative is more than the increase in turnover or jobs, but found in the lives that have been impacted, and the trust that the community has demonstrated.

The impact that the co-operative has had on the recovery of Cobargo, one of the hardest hit communities in the 2019-20 bushfires, is testament to its rich social capital and network of strong social connections which saw support delivered quickly to those who needed it most.

It was lovely to watch, the staff were run off their feet, but they still found the empathy and time to chat, Dan stepped up to the mark, it was a big ask.
June Tarlinton, Chair of the Board

Cobargo has been recognised as a leading example of community-led response often cited by government and media as a stand out community. The locally embedded co-operative structure contributed to the community’s ability to respond in a timely and collaborative manner and enhancing its resilience.

As a member owned organisation, the Cobargo Co-operative puts its members and the community first. This case study demonstrates the unique position that Cobargo was in to serve its community as not only first responders, but in long term social, emotional, physical and financial recovery.

The high level of trust that had already been built in the co-operative allowed it to be a conduit to receive and distribute cash and essential donations to those most in need. It acted as a physical place to meet and already contained a structure to organise and mobilise support. Cobargo is still in recovery, however, the trust that the community has in it has grown in addition to it retaining a considerable amount of the financial aid donated within the local economy.

The transparency and accountability of the co-operative model allowed for quick decision making and direct governance chains to allow immediate action.

People still say thank you to the staff as they were the first people they saw who helped them.
Dan Williamson, Manager
Share this article

Every single grower returned to business after Cyclone Olwyn in 2015, even with an 18 month shut down in production due to longer growth cycles of smaller banana species.
SEE ALL CO-OP AND MUTUAL CASE STUDIES